Monitoring cracks, recalculation and inspection of the VIPP Reyran viaduct 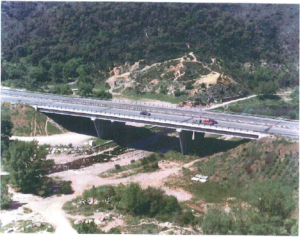 The Reyran viaducts is an independent-span viaduct made of post-tensioned prestressed beams (VIPP) located on the A8 motorway at PR (point repère or reference point) 138+100 (OA, or engineering structure, 1381), connecting Aixen-Provence and Nice. This three-span structure has two unconnected decks, one per direction of travel, and was built in the early 1960s then widened in 1990. The widening was secured using prestressed tubes.

The existing structure is part of the generation of VIPPs built before 1965, whose technology is rather deficient in the following respects:

Recalculation of a VIPP-type deck, complete modelling of the structure, carrying out checks under normal and tangential forces. Checking existing framework by radar inspection in situ. Specific monitoring of particular cracks. 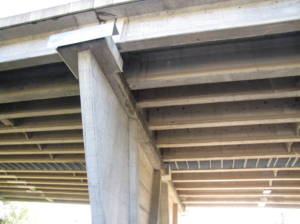 ESCOTA tasked DIADES with carrying out a general diagnosis to include:

These tasks revealed defects in the reinforcements, such as the shearing force in the beams and the cross struts.
A targeted program of inspections of the existing framework was then carried out by radar location in order to check the structural insufficiencies prior to starting the reinforcement plans.